Investing for comfort or superior returns

Investors often feel comfortable investing in the most widely held stocks.  These household names generally have had successful pasts and are seen in a favourable light by the majority of investors. Viewed by many as safe and sensible investme

nts, investment professionals are not likely to be criticised for suggesting purchasing those stocks.

The 12 largest ASX listed companies (see graph below) make up just under 50% of the ASX 200 index with a combined market capitalisation of approximately $705bn. However, analysing the fundamentals of these companies reveals that most of them are facing considerable earnings pressures in the future, yet they are still remain central to most investment portfolios.

The 4 largest companies on the ASX are the “big 4” banks, all of which are heavily exposed to the Australian residential property market, where property prices in terms affordability are higher than in most developed markets.  The banks are being forced to raise additional capital, diluting profits, and now have restrictions on their loan book growth thereby limiting overall growth prospects.

The resource and energy companies BHP Billiton, Rio Tinto and 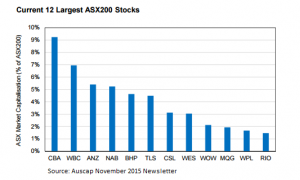 Woodside Petroleum are all victims of both falling demand and continued expansion of supply which put downward pressure on prices.

The investment merits of these companies should not be overstated as they face increasing headwinds to earnings growth in coming years, not a very comfortable position in which to operate.